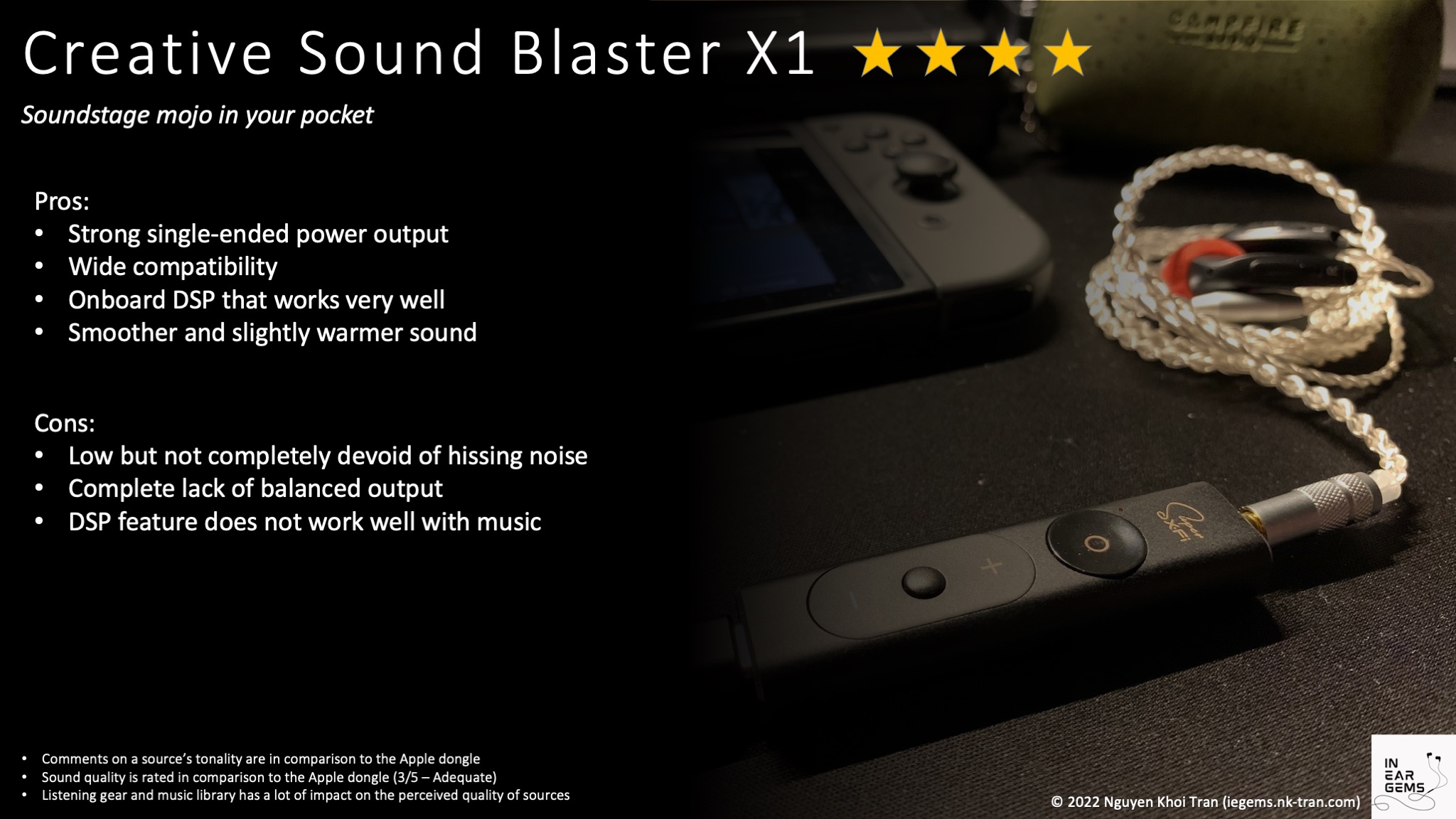 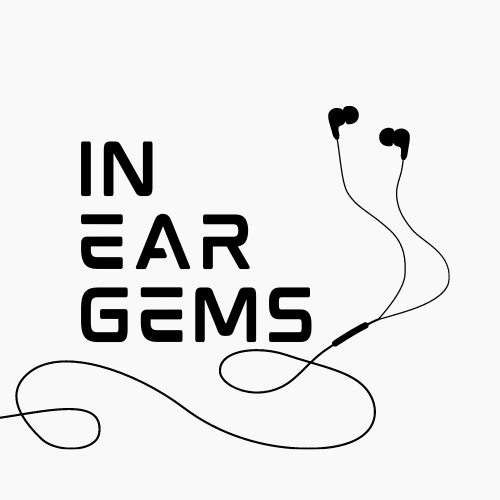 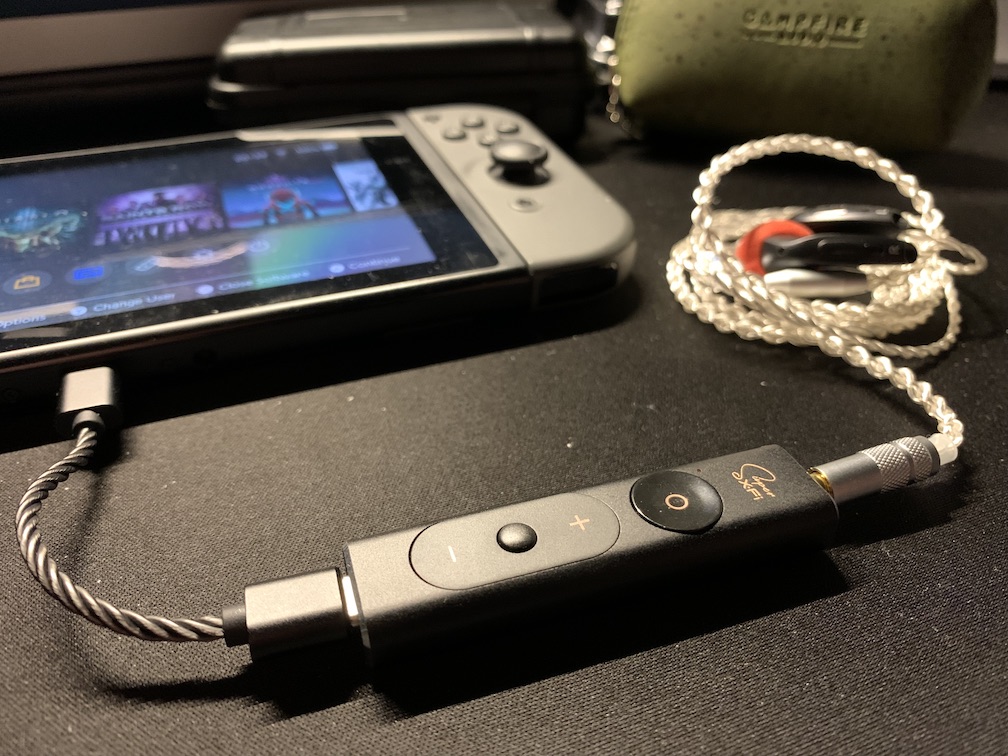 Obscurity? Maybe. When I was wet behind the ears, I thought Audio Technica M50x was top “audiophile” stuff because it has a fancy and unfamiliar brand name.

Today, I want to share my impressions of a product that makes the line between “consumer-grade” and “audiophile-grade” even blurrier: Creative Sound Blaster X1

Creative Sound Blaster X1 (I’ll call it X1 in this article) comes in a tiny box that screams “consumer product”. I will not bat an eye if I see this product in JB HiFi or EBGames (Aussie store chains selling electronics and video games). 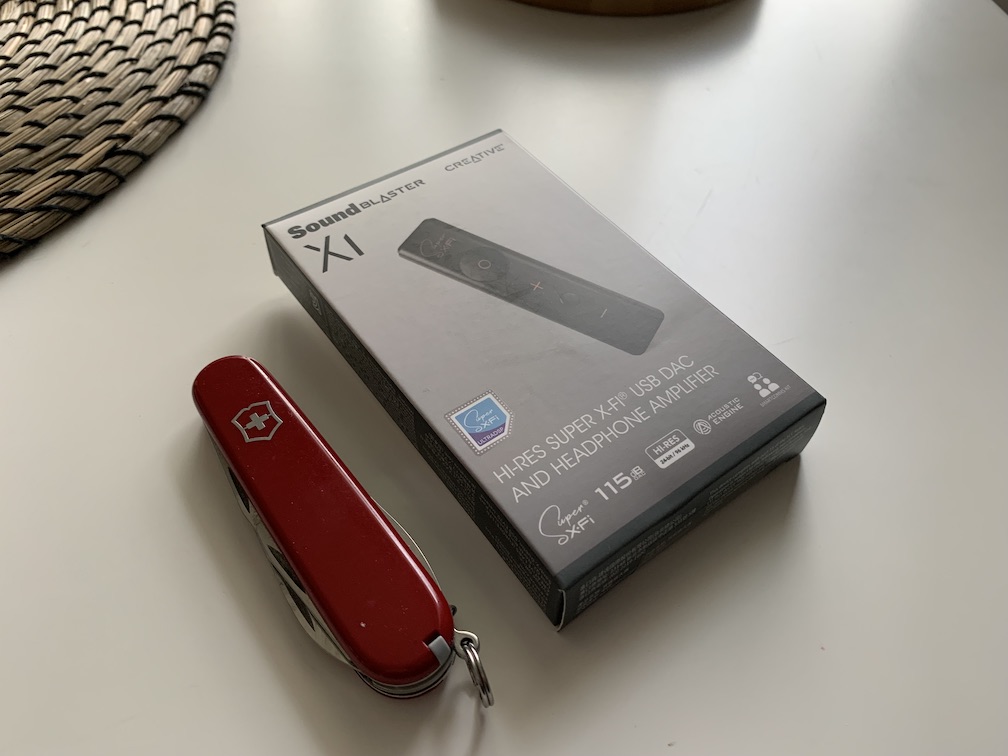 Inside the box, you find the dongle itself, a USB-C to USB-C cable, user manuals, and candies (just kidding, don’t eat those silicas). 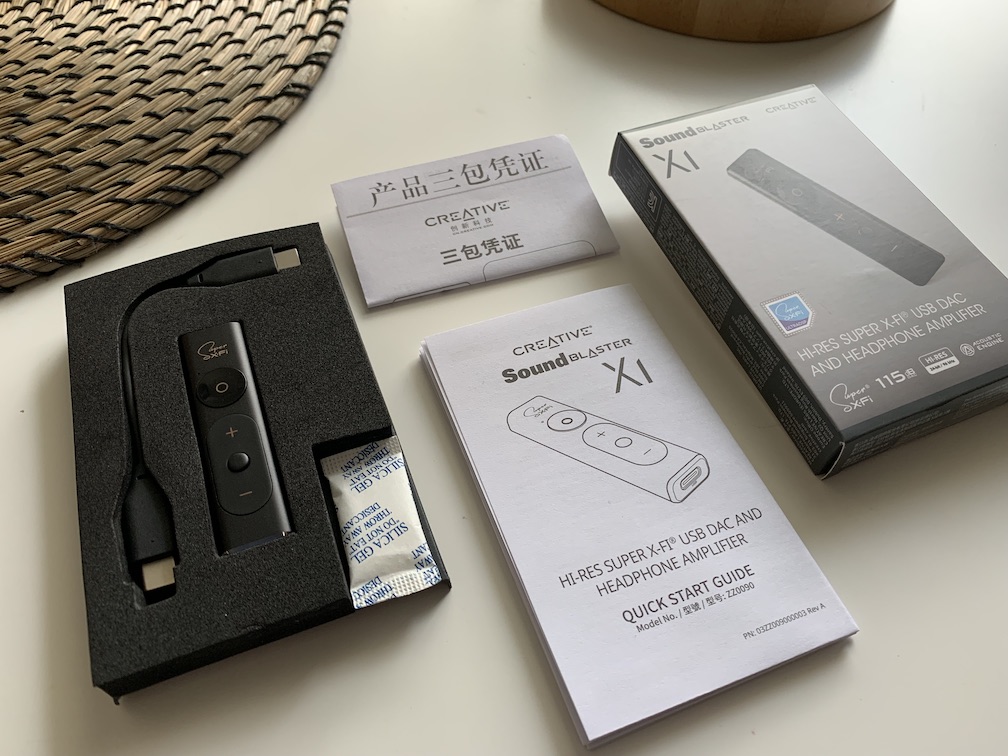 The unit itself is clad in a thin metal shell. If you tap on the unit with your nail, you can hear a slightly hollow “tonk” sound. However, the unit is rigid and does not exhibit any flexing or deformation when I apply pressure on it. I like the shiny bevels connecting the side panels to the top and bottom of X1. 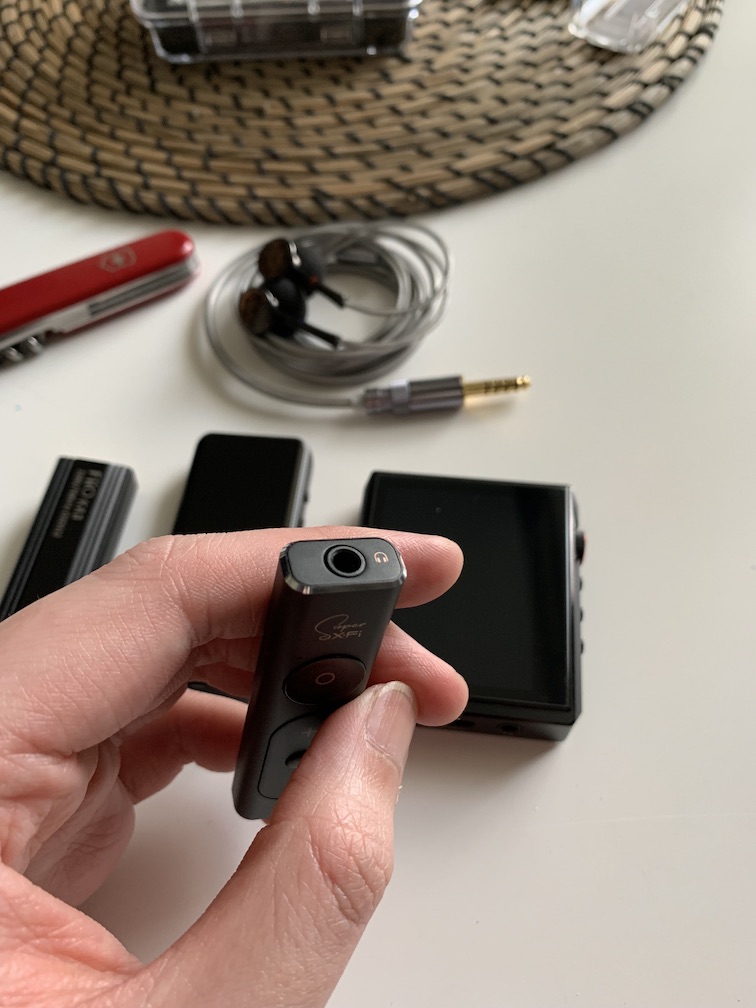 Size-wise, X1 is a thin, small, and light unit. It is as long as my BTR5 but narrower than everything else in my collection. Holding X1 is like carrying a Wrigley’s double mint chewing gum stick or a Bic lighter.

The front of X1 has four buttons for controlling the volume, pausing music, and toggling the SXFI feature. It’s good that there is a big button to control the SXFI feature because it does not work well with every type of content.

The back of X1 is where it gets controversial. It’s evident that a large sticker is covering the entire back of the unit. 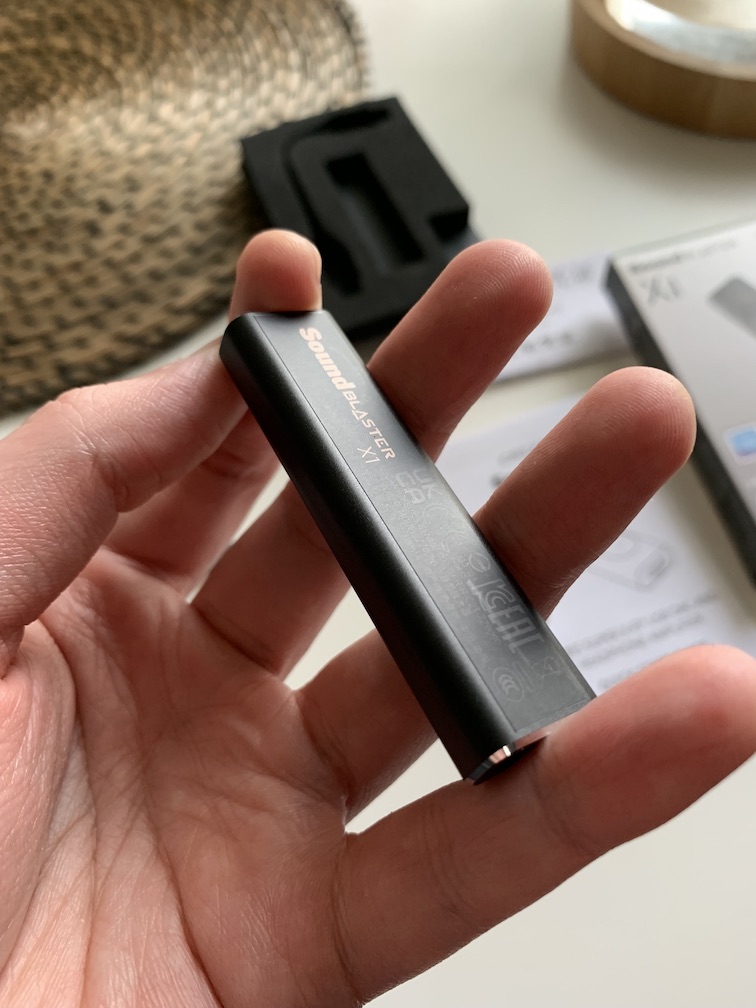 If you peel off the sticker, you are greeted with the alter ego of X1: Creative Super X-FI Amp. 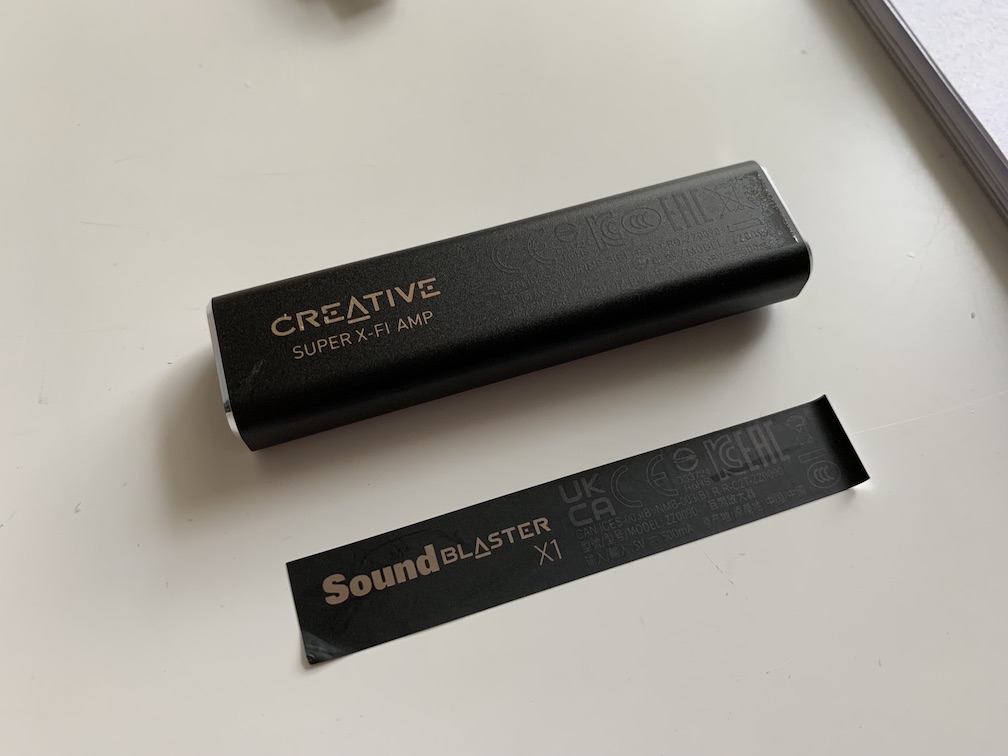 This situation has ruffled some feathers, so I reached out to LucasCL at Creative, and this is the answer. I hope that it clears up the confusion.

The difference between the Sound Blaster X1 and the SXFI Amp is that the X1 is now powered by the Sound Blaster suite of audio processing technologies (which includes our Sound Blaster Acoustic Engine, CrystalVoice, Scout Mode) via the Creative App for Windows® 11 and macOS®. This was one of the most requested features from our customers.

We have also included support for auto mic mute/unmute function in our SmartComms kit for people using the X1 for work calls via Zoom/Teams etc.

The compatibility of X1 is superb. It works with everything I have: Windows laptop, Macbook, iPad Pro, Android phone, iPhone, and Nintendo Switch. Yes, the Switch! I was stoked when I saw the USB icon in my Switch’s volume bar since none of my existing dongles work. Finally, I can use any IEM with Switch, including the sensitive ones like Andromeda 2020.

Another great feature of X1 is that it can work with headsets and microphones. This feature is similar to the Apple dongle yet rare among audiophile dongles. It means if your IEM cable has a built-in mic, you can use it for phone calls. However, you CANNOT use the mic of X1 with an IEC-711 coupler because the microphone seems to significantly roll off the bass. You will see what I mean when I discuss the sound quality below. 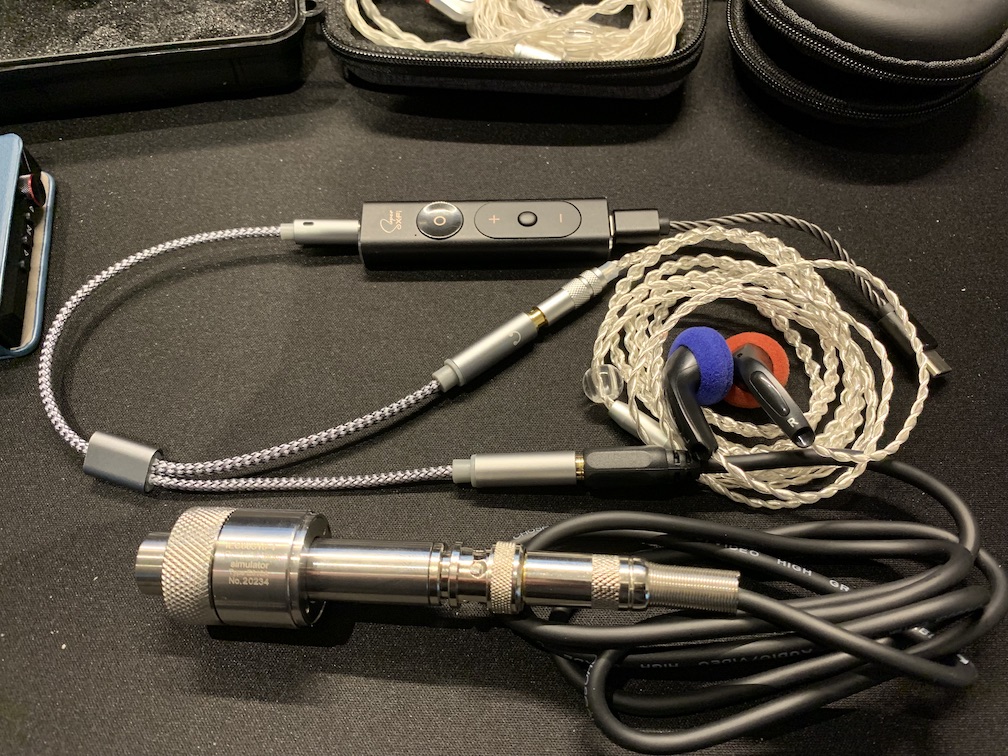 X1 does not require any software. However, you can install and use the SXFI app on Android to customise the SXFI feature of X1. As far as I understand, the app uses your phone’s camera to scan your face and ears to estimate your Head-related Transfer Function (HRTF). The calculation is then uploaded to X1 to customise the soundstage virtualisation feature for you. This customisation is saved in X1, so it is always available regardless of your audio source. 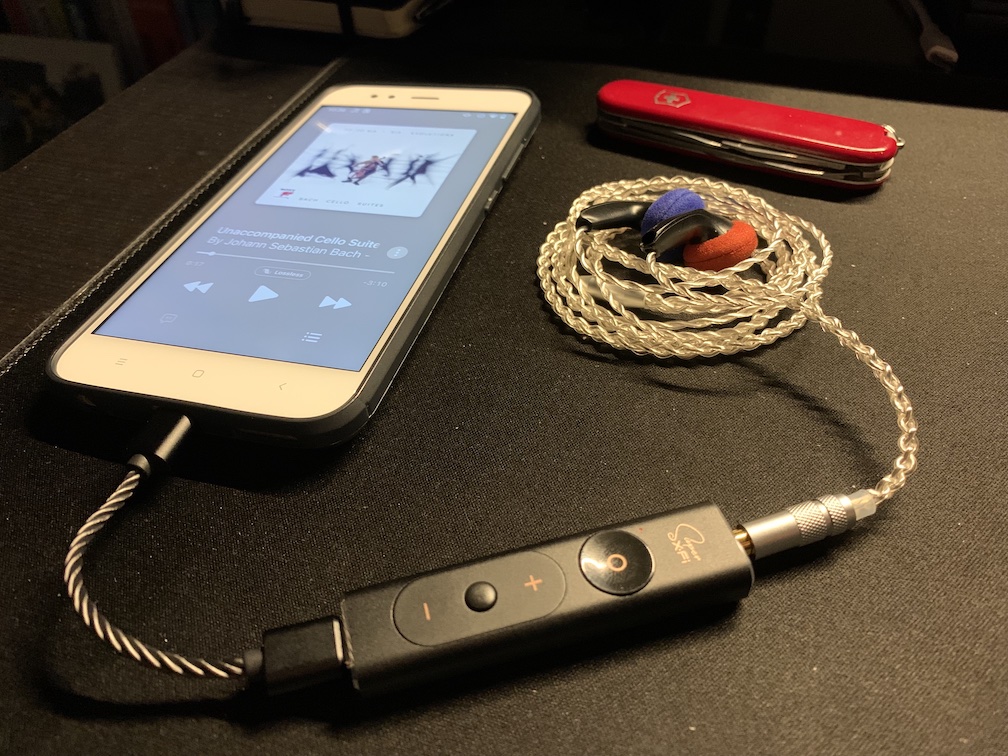 X1 is a surprisingly potent DAC+AMP dongle. Its power output matches my Fiio KA3 in measurement (Courtesy of Amir from ASR) and real-world performance. It means that X1 can drive most portable gears to a satisfying level with crisp transients and dynamic contrasts. The overall presentation of X1 is warmer and less edgy than the Apple dongle and my other sources with ESS chips.

Despite the high power output, X1 creates a decently dark background without any significant hiss. However, I still hear a bit more hissing than expected when using X1 with sensitive IEMs such as Andromeda.

The sound signature of X1 changes when you activate its Super X-Fi (SXFI) feature. Let’s discuss SXFI in detail before discussing the usual “audiophile” stuff.

Essentially, it is digital signal processing (DSP) for mimicking the illusion of sitting in a (home) theatre with a surround sound system even though you are wearing headphones or IEMs. All of the DSP happens within the dongle itself.

Since the statement seems like marketing bluffs, let me explain further. When you listen to head-fi gears, because the drivers are very close, everything sounds sharp and crisp, but at the same time small and closed in. Some IEMs, such as MACH 10 and MACH 20 that I reviewed recently, push this phenomenon to the point of making you feel like a tiny concert hall is in your head.

On the other hand, speakers in a good room sound large. Everything is further away. Instruments and vocals sound life-size, even larger than life. However, the stereo image does not have that pinpoint, tack-sharp feeling of headphones and IEMs.

SXFI makes the sound a bit blurrier, a bit reverb, and perhaps adding a bit cross-feed to turn the IEM sound into speaker sound: distant and large.

Now, let’s be clear. SXFI does not work all the time, especially with music. I did not have good experience with any vocal music. Yes, X1 manages to push the sound further away, but it pushes the sound so far that it feels like I am listening from a different room. Instrumental and orchestral music fare better, but not always.

Where SXFI shines are movies and video games. I tried X1 with some YouTube clips from the Top Gun Maverick movie, and I was blown away by the effect. The goodness of SXFI is highlighted when you turn off and hear your equipment’s real soundstage again. I was using flat head earbuds, which have a way larger soundstage than IEMs, but X1 with SXFI manages to shame them. SXFI works exceptionally well with Diablo 3, Saint Rows 3, and Skyrim on Switch. Pinpointing the direction of gunshots becomes more manageable when the sound forms a dome around you.

Based on the experience, I can confidently say that SXFI is not a poorly implemented gimmick. Just don’t expect a miracle when it comes to music.

I can never shake the feeling of disbelief when any DAC/AMP can squeeze more performance out of the Andromeda than the humble Apple dongle, simply because Andromeda is too sensitive to benefit from extra output power. Still, I have to report that X1 manages to do just that. The size of the music notes feels a bit smaller, so busy sections in the music are a bit more well separated on X1. The violin also sounds a bit less edgy on X1. You can say X1 is “warmer” or “darker” than the Apple dongle because X1’s higher frequency is slightly less forward. The only advantage of the Apple dongle is having less hissing noise than X1.

The hissing noise becomes a significant issue when comparing X1 to KA3. Despite having the same output power, KA3 has a noticeably darker background than X1. There are also differences in the sound presentation between X1 and KA3. In summary, X1 gives Andromeda a slightly softer, less edgy sound than KA3. However, KA3 makes the whole stereo image a touch clearer and more separated. I think both do a good job. However, KA3 wins this round thanks to the cleaner sound.

Final Audio E5000 is a nightmare for most portable gear due to how demanding it is in terms of power output. The Apple dongle is undoubtedly out of its league when handling E5000. The lack of power manifests in a haze or “veil” covering the entire stereo image. All of the details in the lower frequencies, such as the sound of the cello section in the background of the test track, are all mushed together into a boomy sound.

Switching to X1 improves the sound quality of E5000 noticeably. The veil is lifted. I can hear the texture of the cello section clearly, meaning there is a “brrrm” sound when the bow is drawn instead of a blob of low-pitched noise. The violin of Bomsori Kim is slightly warmer and darker with X1 compared to the Apple dongle.

Switching from X1 to KA3 yield yet another level of refinement over the sound of E5000. The whole stereo image is a bit more separated and brighter, if not edgier. I think both X1 and KA3 drive E5000 to the same level. However, they shift the tonality of the IEM slightly. I find the brighter signature of KA3 works with E5000 better than the warmer and darker X1.

What makes something “audiophile-level”? Perhaps it does not matter whether something has the “audiophile street cred”, as long as it pays utmost attention and provides the sound quality you can sit back and enjoy.

Creative might no longer be (or have ever been) an “audiophile” brand. Still, I believe that their Sound Blaster X1 DAC/AMP dongle is absolutely “audiophile-level”. Based on sound quality alone, I rate X1 3.5/5 because it slots neatly between the Apple dongle (3/5 - Adequate) and Fiio KA3 (4/5 - Good). Considering the compatibility with gaming consoles, the SXFI feature, and the current pricing, my final rating for X1 is 4/5 - Good. Suppose you need a versatile dongle and don’t rely on highly sensitive IEMs. In that case, the Creative Sound Blaster X1 receives a recommendation with reservation from this reviewer.